A publication about Old Sydneians supported by the OSU and the School. You can pre-order you copy by following the link below.

The stories of Old Sydneians who laid down their lives in the Great War.

This book will be available for Anzac Day 2019. It will be a significant addition to the history of our School and will bring to life the stories behind the names on the centre panel of the Great War Memorial in Big School.

The Sydney Grammar School War Memorial is recognised as one of the world’s great school memorials to those who enlisted and gave their lives in the First World War. It records the names on the centre panel of 300 Old Sydneians who lost their lives between August 1914 and April 1919, and on the left and right Panels, 1472 Old boys and staff who voluntarily enlisted to participate and survived.

The Memorial was unveiled in 1921 by Sir Harry Chauvel, himself an Old Sydneian and Australia’s first Lieutenant General, preceding Sir John Monash. The design and construction for the War Memorial by Eric Appleby (OS) was paid by voluntary subscriptions by Old Sydneians and their relatives. It is believed that these subscriptions paid for the Memorial in full and funding from the Federal Government’s postwar Memorial Fund was not necessary.

How many of us sat in front of the great imposing Memorial in School Assemblies on Friday afternoon, or in detention, and wondered at some of the names on the boards? Those names are ‘just names’ until they have been given a story of their time at school and after, as well as their service during the War. Until now there has been no complete record at the School of those who died in the First World War, only a general, summarised overview of the School’s service as a whole. This book will open a window into that period at the School, and will detail the Old Boys commitment to the School despite having left, in some cases, many years before. 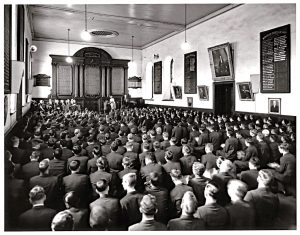 During the last ten years Philip has undertaken a pilgrimage to visit each of the old boys on the Memorial, sometimes to very difficult places. Further research undertaken by Philip has discovered another 34 Old boys whose names were inadvertently omitted from the Memorial when it was unveiled in 1921, and their stories will be told in this book. On the left and right panels another 348 Old boys were discovered who had been omitted. The School contributed more Old boys to the Great War than any other School outside the United Kingdom. Of the 8,500 who enrolled at the School between 1857 and 1918 over 2,150 enlisted for the Great War.

Some extraordinary details have been unearthed during this research. For example there are several photos in the School archives which show the fervor to enlist. The 1907 Upper 4th class photo, depicts with amazing clarity, yet informal manner, the 29 students who all signed this particular photo. Of the 21 students who enlisted for the Great War, three were to lose their lives and a further 14 were to be wounded. In those days the Old Boys used to form a rugby team each year to play the 1st XV. All 15 members of the Old Boys XV of 1909 enlisted in the War and five were to die. All these fascinating stories will be told. 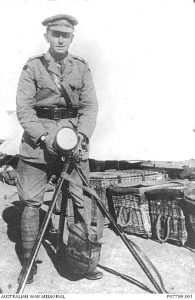 Sadly, the War proved a catalyst in the evolution of the Old Sydneians’ Union.

“World War I proved a catalyst in galvanising links between the Union and the School. From 1915 to 1919, a new spirit came over the Union which was reflected in the general body of Old Sydneians. ‘Old Sydneians at the front from 1915 onwards were kept in touch with the School by The Sydneian as a roll of honour, exceptional in its completeness’. The Union’s Dinner became a meeting place for those in training and those who had returned from the War.”

The book will have an initial print run limited to 500 books. Currently, in October 2018, the book is still in production. It will be 512 pages, with a hard cover and dust jacket. The paper will be high quality colour image paper with about 180,000 words of text and over 700 images of the final resting places of the Old Sydneians in the beautiful Commonwealth War Graves Cemeteries and Memorials. Also photos of the many Battlefields, black and white images of Old Sydneians and School photos organised according to the appropriate stories. The finished book will be of the highest quality, as befits the Old Sydneians who gave their lives.

In this book Phil aims to bring alive the stories of the Boys, by giving a factual and realistic account of the life and times they lived in.  I hope that some readers will be inspired to visit some of graves of these Boys and stand for a while in reflection and give thanks for their sacrifice for what they believed was ‘the right thing to do.’

Sadly, the War also proved a catalyst in the evolution of the Old Sydneians’ Union.

“World War I proved a catalyst in galvanising links between the Union and the School. From 1915 to 1919, a new spirit came over the Union which was reflected in the general body of Old Sydneians. ‘Old Sydneians at the front from 1915 onwards were kept in touch with the School by The Sydneian as a roll of honour, exceptional in its completeness’. The Union’s Dinner became a meeting place for those in training and those who had returned from the War.”

Our initial print run is limited and I encourage you to order quickly. We will advise you when the book is available and the means for payment.

Please enter your e-mail address. You will receive a new password via e-mail.